The 1964 election marked the start of a prolonged decline in presidential voter turnout that lasted until the 1990s. A recent analysis of the turnout rate in the US presidential elections from 1952 to 2020, however, reveals an increase. previously expected by election specialists. In new research, Francine Romero and David Romero note that the decline, although real, masked phenomena which, in the background, pushed participation upwards. The phenomena, ironically, are what many see as harmful to American democracy: the polarization and negative publicity of the presidential campaign.

In the 2020 presidential election, nearly two-thirds of eligible voters voted, a proportion not seen in more than a century. And while voter turnout, on the whole, has been on an upward trajectory over the past 60 years, there have also been marked declines during this period. Figure 1 below shows the turnout in the US presidential elections from 1952 to 2020, as measured by the population eligible to vote (VEP).

Figure 1 – Participation of the VEP in the US presidential elections 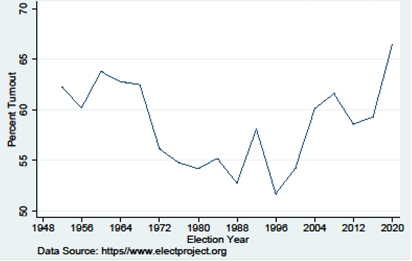 Figure 1 shows the upward, unstable but upward trend until 1960. From then on, however, turnout plunged downward during the 1996 election (with the notable exception of 1992). Much has been written to explain the individual decision not to vote. Resting on individual level, national survey data sources (p. US National Election Studies series), researchers have offered a wide range of explanations for this decrease in the propensity to vote from the 1960s to the 1980s (p.

Recent surveys using National level Election data updated our understanding of trends in the turnout trajectory. Going back to Figure 1, it is evident that the turnout in the presidential election is very different now than it was when researchers began to investigate its downturn. By the end of the 1980s, it emerged that the drop in turnout had been replaced by wild, but possibly flattened, fluctuations. Indeed, the turnout literature describes that the decline in turnout in presidential elections ended in 1972, after which it stabilized until 2000.

Modeling the drivers of participation in the presidential election

Again, referring to Figure 1, however, it is clear that turnout in the US presidential election saw a noticeable rise from the 2000 election, so the description needs to at least be updated. Our analyzes reveal the two main characteristics of participation: its downward slide, programmed as an interruption after 1968; and its constant increase masked by the downward slide. Taking this shift into account, attendance increased by approximately 11.9. percent of the 1952 to 2020 elections. But, if the turnout has increased, what is the reason for this explanation? Figure 2, below, offers answers.

The upward trend is the indirect result of political polarization. The effect is indirect because polarization provides the atmosphere in which presidential elections take place. As such, it provides the impetus for what we assume to be direct and positive influences on turnout: negative ads for the presidential campaign and voters’ beliefs about how their participation affects government behavior. (known as External Voter Efficiency). Our model examines elections from 1960 to 2012, elections for which negative advertising data is available. 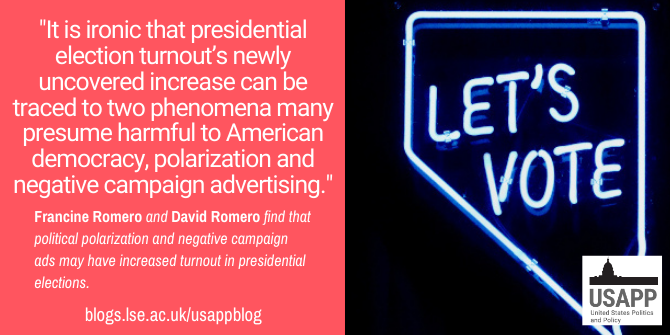 Photo by Manny Becerra on Unsplash

Even more interesting is how these phenomena contributed to the estimated 6.1 percent turnout increase in the elections from 1960 to 2012. In order to isolate the negative combined effect of campaign advertising Presidential election and the external effectiveness of voters on increasing turnout, the turnout decline after 1968 is canceled out, thus giving their combined influence as if the post-1968 drop had not occurred. This estimate is given in Figure 3 below. 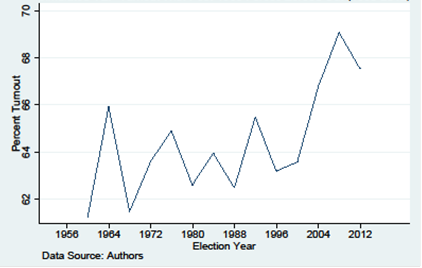 The simulated trend suggests that the turnout increased on average by just over a third of a percent for each election from 1960 to 2012. This equates to an increase of about 4.7 percent during that election. period. Another way to estimate the increase is to take the difference between the parameter estimates for the period: 61.2% for 1960 and 67.5% for 2012. This suggests an increase of about 6.3%. The parameter difference is larger because it is more influenced by the large increase during the 2004-2012 elections, while the average estimate is more influenced by the relatively flat turnout projection between the parameter estimates. Regardless, the negative publicity of the presidential campaign and voters’ beliefs about the extent to which their participation affects government behavior is believed to have had a significant influence on the increase in turnout.

Finally, it is also possible to separate the contributions of these factors to the estimated increase in participation. From 1960 to 2012, they evolved in different directions: negative publicity increased sharply and external efficiency decreased sharply. However, as negative publicity has increased faster than effectiveness has decreased, their combined effect on participation is positive. Negative publicity is estimated to have increased turnout by about 13.3%, while external efficiency is estimated to have decreased turnout by about 8.6%, an overall increase of 4.7%.

It is ironic that the newly discovered increase in voter turnout in the presidential election can be attributed to two phenomena that many presume harmful to American democracy, the polarization and negative publicity of the campaign. The model proposed to support this claim is not the only one, or even perhaps the best, to pursue this question. It can, however, introduce a new avenue of inquiry to understand participation in the American presidential elections.

Note: This article gives the author’s point of view, not the position of the USAPP – American Politics and Policy, or the London School of Economics.

Shortened URL for this article: https://bit.ly/3CjE9Ko

Francine Sanders Romero – University of Texas at San Antonio
Francine Sanders Romero is Associate Professor and Chair of the Department of Public Administration at the University of Texas at San Antonio. She is a political scientist whose areas of interest link political behavior and institutions. His recent publications have appeared in State and Local Government Review and Journal of Social Science History.

David W. Romero
David W. Romero is a retired associate professor of political science specializing in American electoral behavior. His work has been published in journals such as Political Behavior and Presidential Studies Quarterly.